Syrah-Viognier Co-ferment?  What the heck is that? you ask.  Welllll …Co-fermentation is the practice of fermenting two or more grape varietals simultaneously when producing a wine. This differs from the more common practice of blending separate wine components after fermentation.

Co-fermentation is actually an old practice going back to the now uncommon practice of having field blends (mixed plantings of varieties) in a vineyard, or the previous practice in some regions (such as Rioja and Tuscany) of using a small proportion of white grapes to “soften” some red wines which tended to have harsh tannic produced with the winemaking methods of the time. It is believed that the practice may also have been adopted because it was found empirically to give deeper and better colour to wines, which is due to improved co-pigmentation resulting from some components in white grapes.

The only classical Old World wine region where co-fermentation is still widely practiced is now the Côte-Rôtie appellation of northern Rhône. In Côte-Rôtie, the red variety Syrah and the aromatic white variety Viognier must be cofermented, if Viognier is used. The reason why Viognier has been kept in Côte-Rôtie is that it adds signature floral aromas to the wines. The popularity of Côte-Rôtie has led to other New World interpretations of this blend, most notably the Shiraz-Viognier blends of Australia, which are also produced by co-fermentation.

The reason why co-fermentation is not more widely practiced is that it “locks in” a certain blend already at the start of the fermentation, which gives the winemaker less possibility to adjust the blend after fermentation.  However, with some creative ingenuity one can find a gem to unlock! 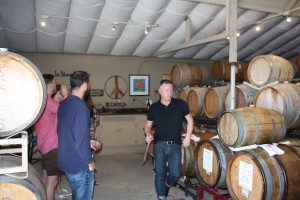 Our Futures are testing grounds where you can “steal” & taste wines such as the co-ferment directly from the barrel and purchase them by the 1/2 or full case at a significantly reduced price!! These are constantly changing so if you haven’t seen us in awhile there are new ones every month!!!

New wines are listed on the main site page..