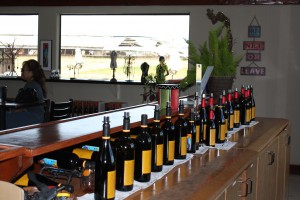 Albariño is an Iberian variety of white wine grape grown. Albariño is the Galician name for the grape; in Portugalit is known as Alvarinho. This wine is noted for its distinctive botanical aroma, very similar to that of Viognier or Gewurtztraminer suggesting apricot and peach. It is unusually light with nice acid character and just a hint residual tartness.  A great alternative to Sauvingnon Blanc or Chardonnay at this time of year. Give it try!

Cuvee champagne is a sparkling wine produced employing the Charmat Method from a mixture of several grape varieties exhibiting a crisp & bright refreshing wine.  It is especially perfect your holiday celebrations or as a stand-alone.  Try something different … drop a frozen strawberry or peach slice in and let the magic happen!

Sangiovese is a red Italian wine grape variety that derives its name from the Latin sanguis Jovis, “the blood of JOVE.  Though it is the grape of most of centralItaly it is the main component of the blend Chianti, but also as the only component of Brunello di Montalcino and is also be used to make varietal wines such as the modern “Super Tuscan” wines like Tignanello.  While not as aromatic as other red wine varieties, it has fresh fruity flavors of strawberry and a little spiciness, but has subtleties of oak with earthy aromas and tea leaf notes.

A whimsical blend created by our very own “Captain” Liske back in the day which is now back for its 5th rendition by popular demand.  It is fruit forward with plenty of vanilla and tones imparted by barrel aging. The intriguing part of this blend is that it has qualities of its climate and terroir, creating a wine with plenty of individuality and uniqueness of our valley and surrounding areas.

Originally fromBordeauxin the southwest of France Carbernet is now widely planted around the world.  Cabernet tends to be a full-bodied varietal having flavors of cassis (black currant liquor), blackberries and other dark fruits mixed with complexities such as pencil lead, tobacco and cigar box cedar. This particular offering is mellow yet has very interesting complexity.  A great wine for a Wednersday night (or any other for that matter).

Petite Sirah earned its name from the small size of the berries. This wine is produced inAmericawith its ancestry known as Durif ( its international name) having originated from a cross of Syrah and Peloursin vines.  It has a fruity, hardy, dense character producing a purple colored wine that offer flavors of black pepper, blackberries, blueberries, spice & licorice.

Also be on the lookout for that ever elusive bonus pour.  You never know what might be popping up.

Reservations for Groups of 8 or more are REQUIRED…